Secretary of Administration Sharon Minnich Tuesday announced details of a new three-year labor agreement which is in the final stages of being voted on by members of the American Federation of State, County and Municipal Employees (AFSCME) Council 13 that will save approximately $13.6 million in health care costs.
In addition to the savings in the proposed contract, the Pennsylvania Employees Benefit Trust Fund (PEBTF) has approved further changes to active employee health care that will save $59 million over the next three years, strengthen the financial stability of the fund, preserve high quality benefits for employees and mitigate increases in employer contributions.
The Commonwealth also applied plan design changes to the retiree population which also resulted in savings of $121.2 million.
The Retiree Employees Health Program (REHP) currently provides health benefits to approximately 64,000 retiree state employees and an additional 40,000 dependents. There are no increases to retiree contributions.
The AFSCME agreement covers the majority of union-represented employees under the Governor's jurisdiction.
"The modest wage increases in the proposed AFSCME agreement, coupled with greater contributions for health benefits, represent a package that is fair to employees and responsible to taxpayers, and I would like to thank AFSCME for being a partner in these negotiations," said Secretary of Administration Sharon Minnich.
Key provisions of the AFSCME contract include:
-- A 25 percent increase in the minimum employee health care contribution from 2% to 2.5% of salary;
-- A 7.25 percent increase in employee base pay over the life of the three-year agreement.
-- A reduction in the health benefit entitlement for those on extended leaves without pay.
The increase in AFSCME employee healthcare contributions will save approximately $13.6 million over the life of the contract. Extending this savings to all employees results in approximately $31 million in savings.
In addition, changes to the extended leave without pay provisions in the AFSCME contract will save an additional $3 million.
In accordance with Act 100 of 2016, signed into law by Gov. Wolf earlier this year, the administration has provided a copy of the proposed collective bargaining agreement and required cost analysis to the Independent Fiscal Office (IFO).
This transmittal details the costs and savings associated with the AFSCME contract and other agreements collectively bargained under Act 195, as well as savings achieved through collective bargaining and the PEBTF.
When combined, all savings associated with employee contributions and health care plan design changes result in approximately $214.2 million over the next 3 years.
NewsClips:
AP: Contract For PA Government Workers Nears Approval
State Hikes Health Care Costs for Employees, Expects Savings
Posted by PA Capitol Digest at 10:12 AM 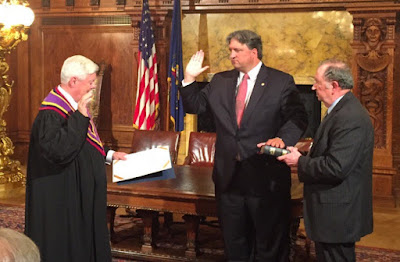 Bruce Beemer Tuesday was sworn in as Pennsylvania’s Attorney General by Chief Justice Thomas Saylor literally minutes after the Senate unanimously confirmed his nomination by Gov. Wolf.
Beemer, former PA Inspector General and First Deputy Attorney General, takes over from Bruce Castor who held the office only 14 days after the conviction and resignation of Kathleen Kane.
“Bruce Beemer has the unique experience and skillset as a prosecutor, lawyer and administrator to begin the healing necessary to put the Attorney General’s office back on track,” said Gov. Wolf. “He is trusted by the rank-and-file members of the office and understands better than anyone what must be fixed to restore the public trust. I thank the Senate for their swift confirmation and vote of confidence in Bruce and I look forward to his continued public service to the people of Pennsylvania as Attorney General.”
Click Here to listen to Senate Majority Leader Jake Corman (R-Centre) comment on the Beemer nomination on the Senate Floor.

Porn Email Report
Two Senators Tuesday expressed concern about the fate of the porn email report being prepared by Douglas Gansler and his Maryland law firm.
In remarks on the Senate floor before the vote on Beemer, Sen. Judith Schwank (D-Berks) said the final version of the report should be released to the public saying it was the only way the state can begin the process of “healing” the Judiciary.
On a similar vane, Sen. Anthony Williams (D-Philadelphia) wrote a letter to his colleagues saying—
“Today marks a significant moment in PA's judicial restoration. While all would agree that a stain upon the integrity of the attorney general's office has been removed, the manner in which we as a Commonwealth move forward is equally as important.
“While I understand there has been a decision to move to confirm a nominee immediately, I am very concerned about the process and the resultant nominee. The events that surrounded the removal of the previous A.G. go directly to whether the public can trust that justice is blind, balanced and fair in Pennsylvania. The revelation of bigoted, racist, homophobic, and misogynistic emails, exchanged amongst Pennsylvania's members on the bench, down through the ranks of those that have the privilege to protect and serve our communities, has rocked the trust that basic, working class Pennsylvanians have in our judicial system. In particular, for people of color, women, and those fighting for their sexual orientation.
“I don't know Mr. Beemer, and I look forward to our meeting to discuss his views on the operation of the A.G's office, but in the meantime we are moving to confirm him without the normal question/answer hearings. Especially confirming a person whose name has consistently come up in the middle of the investigation of the emails and allegations of cover up. Let me state that I don't know if any of these allegations are true; that is why the confirmation hearings are needed for public confidence!
“I am not suggesting, nor asking, for the current process to stop, nor am I trying to influence anyone's vote. What I am saying is, as we watch events unfold across this country, these dots are connected. The great experiment of democracy is steeped in the belief that we are a country of laws, and we CHOOSE to respect them, because we trust those that are responsible for the execution of those laws. This expedited process of confirmation, and the parties involved, draw serious questions from those on the outside, looking in.
“I will not participate today, not as a protest, but simply because I have too many questions."
(Photo: From Drew Crompton Twitter Post.)
NewsClips:
Bumsted: Senate Confirms Bruce Beemer As Attorney General
McKelvey: Beemer Unanimously Confirmed As Kane’s Replacement
Esack: Senate OKs Beemer As Attorney General
AP: Ex-Aide Replaces Convicted Attorney General
Posted by PA Capitol Digest at 3:28 PM

Watch Senate Judiciary Committee Live As It Meets On Beemer Nomination For AG Tuesday At 1:30

The Senate Judiciary Committee meets August 30 at 1:30 p.m. to consider the nomination of Bruce Beemer to serve as Attorney General.
Click Here to watch the hearing live.
The meeting will be held in Room 8E-B East Wing Capitol Building.
The full Senate returns to session August 30 at 1:00 p.m. and is expected to take a final vote on Beemer’s nomination before adjourning for the day.
The Senate is not scheduled to return to voting session again until September 26.
Sen. Stewart Greenleaf (R-Montgomery) serves as Majority Chair of the Committee and Sen. Daylin Leach (D-Montgomery) serves as Minority Chair.
Posted by PA Capitol Digest at 4:59 PM