Auditor General Eugene DePasquale Tuesday said through September, the prolonged state budget impasse forced at least 17 school districts and two intermediate units to borrow more than $346 million to meet expenses and keep classrooms open. Interest and fees on those borrowed education dollars could reach $11.2 million.
“Our students have returned to their schools, but much-needed state funding is stalled by the budget impasse in Harrisburg,” DePasquale said. “It’s causing financial insecurity in schools across Pennsylvania and already forcing some to borrow money.
“Instead of focusing on education, schools across the state are having meetings to try and figure out how to get by every month, and shopping banks for loans that will hopefully allow them to keep the lights on.”
In the past month, Department of the Auditor General staff spoke with officials at nearly 300 school districts across the state. The department will continue to reach out to school districts and release updated borrowing figures every month until the final budget is signed into law.
In addition to loan interest payments and fees, the drawdown on schools’ reserve funds results in a permanent loss of future investment income that could support school programs.
“Every available dollar of school funding should go to classroom education, not interest payments and loan fees,” DePasquale said. “We already are seeing extra costs through borrowing and lost revenue from abandoned investments, and it is certainly going to get worse each day this impasse drags on.
“Even if the Commonwealth repays the borrowing costs to the districts and IUs — and that is not guaranteed — the money has to come from somewhere, and that could eat into other parts of the education budget,” he said. “This is already a huge problem affecting districts in rural, suburban, and urban areas. And it is going to turn into a crisis if the budget doesn’t get passed now.”
Some districts are struggling to get loans. For example, Steelton-Highspire School District in Dauphin County reports that it has enough cash to last until the end of September, then it will need to borrow about $8 million. So far, multiple loan requests have been rejected by banks.
“We are seeing the bond ratings for many schools being downgraded, making it even harder and more costly to borrow money to keep classes open until the state budget is resolved,” DePasquale said. “Who is going to help these school districts?”
A list of school districts borrowing is available online.
Republicans React
Senate President Pro Tempore Joe Scarnati (R-Jefferson) and Senate Majority Leader Jake Corman (R-Centre) released a statement following Auditor General DePasquale’s press conference regarding Pennsylvania schools:
“Earlier today, Auditor General DePasquale showcased the very harsh reality of what Gov. Wolf’s budget veto has done to our schools.  They are left with uncertainty and without needed financial support.
“We fully understand the urgency to have a state budget in place.  The General Assembly presented Gov. Wolf with emergency funding legislation to provide our schools with over $3.1 Billion in funding. We urged Gov. Wolf to put our schools and vital services first and sign the emergency funding budget in order to provide stability while we continue to negotiate a final budget agreement.”
A list of funding for school districts that would have been provided in the stopgap budget is available online.
Posted by PA Capitol Digest at 12:55 PM

Gov. Tom Wolf Tuesday vetoed the Republican stopgap budget and called on Republican leadership to get serious about negotiating a final budget that moves the Commonwealth forward.
The stopgap budget bills include Senate Bill 1000 (Browne-R-Lehigh) General Fund Stopgap Budget Bill (summary and Senate Fiscal Note); Senate Bill 1001 (Browne-R-Lehigh) Fiscal Code Stopgap Bill (summary and Senate Fiscal Note); and amended House Bill 224 (Christiana-R -Beaver) with the Education Code Stopgap Bill (summary and Senate Fiscal Note).
Wolf released the following statement:
“Instead of seriously negotiating a final budget that funds education with a commonsense severance tax, fixes our deficit without gimmicks and provides property tax relief for middle-class families and seniors, Republican leaders passed a stopgap budget that once again sells out the people of Pennsylvania to oil and gas companies and Harrisburg special interests.
“Republican leaders are intent on Harrisburg politics as usual and embracing a failed status quo that is holding Pennsylvania back.
“Just like their sham budget in June, this stopgap budget makes it clear that Republican leaders not only want to do nothing to move the Commonwealth forward, but they are intent on taking us backwards.
“If the Republican budget became law, our deficit would balloon to $3 billion, and instead of restoring education funding, even further cuts would become necessary, and our credit rating would become junk status – that’s unacceptable.
“Throughout negotiations, I have tried hard to compromise, and recently, I offered historic reforms to the liquor and pension systems, two areas Republicans say are priorities, and in return, I have received nothing on education, a severance tax or fixing the deficit.
“Despite the political posturing and blatant obstruction by Republican leaders, I know there are rank and file Republican legislators who understand the importance of investing in education and there are rank and file Republican legislators who support a commonsense severance tax.
“Now is the time to come together to accomplish that goal – Pennsylvania cannot wait any longer.
“At every turn, Republican leaders have prevented serious negotiations because they are unwilling to take on oil and gas companies and Harrisburg special interests to make the long-term investments in education and the changes needed to help Pennsylvania families.”
Click Here for a copy of the short veto message for each bill.
Senate Republicans React To Wolf Veto

Senate President Pro Tempore Joe Scarnati (R-Jefferson) and Senate Majority Leader Jake Corman (R-Centre) released this reaction to Gov. Wolf’s veto:
“Today, Gov. Wolf again said no to vital funding for schools and community organizations. By vetoing the emergency funding plan, Governor Wolf is preventing $3 billion of state support for schools and hundreds of millions of dollars for social service agencies from immediately reaching those in need.
“We are deeply troubled that the Governor has elected to hold vital services hostage.  This does not have to happen – the money is there and our state hasn’t stopped collecting taxes. We are simply attempting to end unnecessary hardship while efforts to enact a full budget continue.  Unfortunately, the Governor refuses to see this emergency funding plan as an opportunity to keep money flowing to schools and social service agencies.
“We met or exceeded his request on 70 percent of budget items and offered to match his proposal for school funding, yet Governor Wolf still said no. It’s becoming more and more clear that for Gov. Wolf this budget impasse is about one thing – achieving a tax increase of historic proportions. With that stance, he is ignoring the will of the people. The majority of Pennsylvanians cannot afford for us to raise their income taxes and sales taxes by $4 billion.
“We have real differences. While we are greatly upset by the Governor’s latest rejection, we remain ready to talk further and ultimately pass a fiscally responsible budget for the citizens of Pennsylvania.”
NewsClips:
Wolf Vetoes GOP Stopgap Budget Bill
Wolf Vetoes $11 Billion Stopgap Budget
No Surprise: Wolf Vetoes Republican Stopgap Budget
As Promised, Wolf Vetoes Stopgap Budget
Republicans: Wolf’s Veto Holds Vital Services Hostage
School Borrowing Piling Up Amid Budget Stalemate
Posted by PA Capitol Digest at 12:33 PM 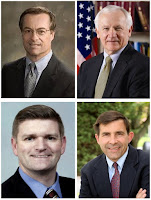 The September 28 PA Environment Digest is now available.  Here are just a few of the headlines--
C.O.G.E.N.T.: JKLM Energy Drilling Contaminates Water Wells In Potter County
The Connection for Oil, Gas & Environment in the Northern Tier (C.O.G.E.N.T.) Friday reported in a Google+ post that JKLM Energy, LLC acknowledged contaminating several water supply wells in Sweden Township, Potter county with a surfactant solution containing isopropanol used in drilling and completing natural gas wells.
The migration was discovered following the use of the surfactant to free a broken drill bit piece in a shale natural gas well at 570 feet below ground on September 18th.
Agenda Set For 2nd Annual PA Environmental Council Policy Conference Oct. 13
A comprehensive list of environmental issues will be the focus of the second annual PA Environmental Council Policy Conference, set for October 13 in Harrisburg.
POWR, DCNR Now Accepting Nominations For 2016 River Of The Year
The PA Organization for Watersheds and Rivers and Department of Conservation and Natural Resources are now accepting nominations from nonprofit organizations for the 2016 Pennsylvania River of the Year.
Nominations are due October 23, then selected nominations will be voted on by the general public beginning in early November.
Keep PA Beautiful Affiliates In 4 Counties Collect Nearly 4,000 Tires
Keep Pennsylvania Beautiful would like to congratulate its local affiliates in Huntingdon, Juniata, Mifflin and Perry counties on a successful 10th Annual Tire War which resulted in collecting nearly 4,000 tires earlier this month.
DCNR Sets 12 Public Meetings To Review Draft State Forest Management Plan
A series of 12 statewide meetings have been scheduled by DCNR’s Bureau of Forestry to seek continued public input on changes to its Draft 2015 State Forest Resource Management Plan charting the course of Pennsylvania’s state forests for future generations.
Beginning October 6, in the Wilkes-Barre/Scranton area, DCNR’s Bureau of Forestry the public meetings will start at 6:30 p.m. and lasting about two and one-half hours.
First Fall Foliage Report Showing Peak Color Times Now Available From DCNR
The first Fall Foliage Report is now available from the Department of Conservation and Natural Resources showing expected peak color times across Pennsylvania.
Help Wanted: DEP Mining Program
The Department of Environmental Protection Thursday announced numerous employment opportunities in its mining programs. Current workforce planning projections highlight the potential for upcoming retirements to open up more than 50 positions across the Commonwealth by 2017.
To read the Digest, visit: www.PaEnvironmentDigest.com.  Click Here to print the entire Digest.
PA Environment Digest is edited by David E. Hess, former Secretary Pennsylvania Department of Environmental Protection, and is published as a service of Crisci Associates.
PA Environment Digest was the winner of the PA Association of Environmental Educators'  2009 Business Partner of the Year Award.
Additional Tools--
Click Here to sign up to receive the Digest directly by email.
Click Here for a Calendar of Upcoming Events.
Click Here to search back issues of the Digest.
PA Environment Digest Twitter Feed: Update on PA environmental issues.
PA Environment Daily Blog: Update on PA environmental issues.
Green Works In PA Google+ Circle: Update on PA environmental issues.
Questions?: Send email to David Hess at: DHess@CrisciAssociates.com
Posted by PA Capitol Digest at 9:41 PM