Gov. Tom Wolf Wednesday announced the award of $2 million in reemployment funding to 10 Strategic Innovation grants across the commonwealth to support the state’s Workforce Innovation and Opportunity Act (WIOA) Combined State Plan
“These funds promote the development of workforce skills for commonwealth employees by employing creative and innovative workforce development strategies,” Gov.  Wolf said. “Strategic Innovation grants not only expand the state’s pipeline of workers for targeted industry sectors, but also promote increased employment opportunities for Pennsylvanians with barriers to employment to obtain jobs that pay.”
Approved through the Department of Labor & Industry, Strategic Innovation grants work to improve the connection and responsiveness of workforce programs to the demand side of the labor market, and increase public-private investment in critical skills through multi-employer workforce partnerships.
“Establishing career pathways as a route for career advancement and development provides expanded employment opportunities for commonwealth residents,” said Sec. Manderino. “Engaging employers directly ensures that we can quickly address any skills gaps in order to meet current and future employment needs.”
A $300,000 grant was awarded to the South Central Workforce Development Board to design and implement rigorous, high-quality integrated education and training programs, which will combine basic-skills instruction with training for a specific occupation or industry, beginning in the fall 2017 semester.
SCPa Works will partner with the Lancaster Workforce Development Board, Lancaster-Lebanon IU13, the Literacy Council of Lancaster-Lebanon, Harrisburg Area Community College, and the Career and Technology Centers in Lancaster and Lebanon counties.
This project will target education and training programs in Lancaster and Lebanon counties for occupations designated “high priority,” and where data indicates higher dropout rates from training programs.
"The integrated education and training model is a promising practice across the country that we believe will greatly benefit South Central Pennsylvania residents,” said Chief Executive Officer of SCPa Works Jesse McCree.  “By providing adult education and literacy services concurrently with contextual workforce preparation activities, we can help build strong career pathways that leads to better economic mobility."
Click Here for a full list of grantees and brief summaries of the funded projects.
Posted by PA Capitol Digest at 12:15 PM

Gov. Tom Wolf Wednesday announced the launch of an informational webpage that details the proposed unification of the Department of Corrections and the PA Board of Probation and Parole , into the new Department of Criminal Justice.
“My administration and leadership from the Department of Corrections and Board of Probation and Parole are committed to the creation of one unified department to improve public safety and strengthen services to victims while preserving the independence of the parole board’s decision making,” Gov. Wolf said. “The unification will save a projected $124 million over five years and reduce recidivism by an estimated 5 percent, all while maintaining current staff levels in both state agencies. That is a great example of government that works.”
The new Department of Criminal Justice will maintain the state system for the custody and rehabilitation of criminally convicted individuals, and the eventual supervision of reentrants on parole, helping them to continue to reintegrate into society.
Over the past several months, Gov. Wolf has worked closely with all stakeholders and two involved state agencies to create a unification plans that increases public safety, realizes government efficiencies and saves money.
The webpage details the cost savings, the role of the unified department, and new org charts, as well as feedback mechanisms, and an overview of the legislation that if passed will create the Department of Criminal Justice.
Sponsored by Sen. Stuart Greenleaf (R-Montgomery), the unification legislation, Senate Bills 522 and 523, are currently in the House. The bills passed the Senate on May 24: Senate Bill 522 by a vote of 38-12 and Senate Bill 523 by a vote of 48-2.
The legislation creates an independent Parole Board, Office of Victim Advocate, and Sex Offenders Assessment Board while unifying the remainder of Parole’s functions with the Department of Corrections. The new department’s responsibility entails all supervision from reception to sentence completion.
“Our goal for the department remains the same,” Corrections Secretary John Wetzel said. “That is to reduce the future criminality of incarcerated individuals and parolees through evidence-based programming and effective supervision techniques coupled with appropriate staffing and resource dedication. This webpage will help us communicate with staff and stakeholders about how we are moving forward with that goal in mind.”
“Keeping everyone involved in the unification informed and apprised is tantamount to the success of this effort,” PBPP Chairman Leo Dunn said. “We hope that everyone who visits the site offers feedback on how we can work to make this unification a success for staff, incarcerated individuals, parolees, and their families.”
The webpage was introduced to all affected agency staff on May 24.
For more information, visit the Department of Criminal Justice webpage.
Posted by PA Capitol Digest at 12:15 PM

Pennsylvania tax amnesty – which waives all penalties and half of the interest for those who pay their past-due state taxes – is more than halfway over, Acting Revenue Secretary C. Daniel Hassell reminded taxpayers today. The 60-day program ends at midnight June 19.
“Only three weeks remain for businesses and individuals to take advantage of the Tax Amnesty program by applying and paying what they owe,” said Hassell. “The June 19 deadline is set by law and will not be extended.
“We encourage those with back taxes to not wait until the deadline. After June 19, a 5 percent penalty will be added to what is owed.”
More than 21,000 applications for amnesty worth an estimated $72 million have been submitted or are in development by taxpayers. More than 91,000 calls have been answered at the toll-free Tax Amnesty hotline, 1-844-727-8283.
Applications and full payments must be made or postmarked by midnight Monday, June 19, 2017. Payments are accepted by check, money order, credit/debit card or electronic funds transfer.
Act 84 of 2016 authorized a tax amnesty for more than 30 taxes administered by the Department of Revenue, including the corporate net income tax, employer withholding tax, sales tax, and personal income tax.
After Tax Amnesty ends a 5 percent penalty will be added to delinquent taxpayers who were eligible, but did not participate, and the department will continue collections activities that recover more than $600 million a year.
Taxpayers can apply or get more information at backtax.pa.gov or by calling 844-PA-STATE-TAX (1-844-727-8283) from 8:00 a.m. to 10 p.m., Monday through Thursday, from 8:00 a.m. to 6 p.m., on Fridays, and 8:00 a.m. to 1 p.m. on Saturdays.
Posted by PA Capitol Digest at 5:46 PM


Add Green Works In PA To Your Google+ Circle
Posted by PA Capitol Digest at 5:41 AM 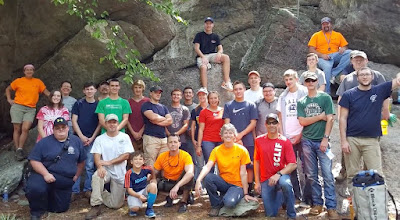 The May 29 PA Environment Digest is now available.  Here are just a few of the headlines--

Conservation In The Delaware River At Stake In Trump Budget Proposal
By Madeline Urbish, Coalition for the Delaware River Watershed
President Trump Tuesday released a more detailed budget proposal for Fiscal Year 2018 recommending severe cuts to the Department of Interior and the Environmental Protection Agency, among other areas.
If enacted, these reductions would result in the elimination of funding for the Great Lakes Restoration Initiative, Chesapeake Bay Program, and other geographic watershed programs, as well as the National Estuary Program and critical water quality research and support grants that go directly to the states.

Three Mile Island Did Not Clear PJM Power Auction, Exelon Evaluating Operating Plant Beyond May 2019
Exelon Corporation Wednesday announced its Three Mile Island [Dauphin County, PA]  and Quad Cities [Illinois) nuclear plants did not clear in the latest PJM capacity auction, highlighting the challenge nuclear energy continues to face without compensation for its ability to produce electricity without harmful carbon and air pollution and to contribute to grid resilience.

Holiday Weekend Offers Great Opportunity To Hike PA Trails To Mark Hiking Week
New and experienced hikers can again pick their pace and path through Pennsylvania's bountiful outdoors in more than 50 hikes planned across the state during Hiking Week 2017.

Video: Learn How Volunteering In A State Park, Forest Benefits YOU, And Them
The PA Parks and Forests Foundation released a new video about the value of volunteerism in Pennsylvania’s State Parks and Forests to the individuals volunteering and the invaluable contribution they make to improving and maintaining recreational opportunity across the state.

To read the Digest, visit: www.PaEnvironmentDigest.com.  Click Here to view or print the entire Digest.

PA Environment Digest is edited by David E. Hess, former Secretary Pennsylvania Department of Environmental Protection, and is published as a service of Crisci Associates.

PA Environment Digest was the winner of the PA Association of Environmental Educators'  2009 Business Partner of the Year Award.