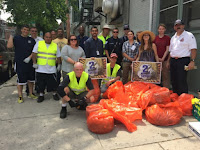 The February 1 PA Environment Digest is now available.  Here are just a few of the headlines--


EQB Will Vote Feb. 3 On Whether To Update DEP’s Drilling Regulations
The PA Environmental Council has been active over the last 6 years seeking to toughen Pennsylvania’s laws and regulations on the oil and natural gas drilling industry.  With DEP’s Chapter 78 (conventional) and 78A (unconventional) regulations coming up for a critical vote February 3, PEC posted this statement on its blog marking this important milestone--
In one week the Environmental Quality Board will be voting on Final Rulemaking from the Department of Environmental Protection to implement a series of critical improvements to Pennsylvania’s oil and gas regulations.
This rulemaking, which has been in development for over four years, is in the final stages
of the approval process. But first it must be approved by the EQB.


Drilling Impact Fees Drop By $5,000 Per Well In 2015, Revenue Loss Could Be $34 Million
The Public Utility Commission published notice in the January 30 PA Bulletin that 2015 Act 13 drilling impact fees will drop by $5,000 per horizontal well, except for wells 3 years old.


Independent Fiscal Office: Oil & Gas Lease Fund Revenues To Drop Nearly 40 Percent
The Independent Fiscal Office released its economic outlook and state revenue forecast on Wednesday adding more bad news to the state’s budget situation.  State revenues under the current structure will increase only 3.3 percent a year from FY 2015-16 to FY 2020-21, while expenditures will increase by 4.5 percent annually.
Oil and Gas Lease Fund revenues are expected to drop 38 percent in the current FY 2015-16 to $71 million from $115 million last fiscal year.  Revenues will increase slowly in the coming years and not recover to $118 million until FY 2018-19 (page 73).


POWR Now Accepting Applications For 2016 Sojourn Grants
The PA Organization for Watersheds and Rivers Friday announced it is now accepting applications for 2016 Pennsylvania River Sojourns Grants. Applications are due February 26.


Game Commission: Cameras To Help Protect Hibernating Bats From Intrusions At Caves
The Williams Pipeline Company recently donated $2,400 to the Game Commission to be used for camera-aided enforcement to protect bat caves from intrusions. The funds will go toward adding six new cameras in two new sites.


To read the Digest, visit: www.PaEnvironmentDigest.com.  Click Here to print the entire Digest.


PA Environment Digest is edited by David E. Hess, former Secretary Pennsylvania Department of Environmental Protection, and is published as a service of Crisci Associates.


PA Environment Digest was the winner of the PA Association of Environmental Educators'  2009 Business Partner of the Year Award.

Rep. Joseph Petrarca (D-Westmoreland) Friday announced he has introduced a four-bill package designed to improve safety for railroad employees.
"Rail freight transportation is on the increase in the United States," Rep. Petrarca said. "Not only because of an increase in consumer goods shipping, but also because it's a way to transport crude oil long distances. Believe it or not, crude oil is the single, fastest-growing rail-transported commodity in the U.S.
"Because rail freight transportation is a $60 billion industry, supporting 221,000 jobs across the country, and because it reduces road congestion, highway fatalities and fuel consumption, it's important that we continue to ensure the vitality of this industry, while also protecting the health and safety of its employees and the general public."
Rep. Petrarca worked with the Brotherhood of Locomotive Engineers and Trainmen to develop these bills.
The first bill (House Bill 1090) would establish uniform requirements for drivers hired by contract carriers to transport railroad crews. Railroads contract with these carriers to transport small groups of railroad employees to and from crew change points and between terminals.
"In many instances, railroad workers are sleeping or otherwise not paying attention to the transport driver," Rep. Petrarca said. "This bill would help ensure workers' safety during these transports with driver standards regardless of the provider or railroad."
The second bill (House Bill 1494) would require the care and maintenance of whistle board signs. Whistle boards are whistle post signs posted beside the track a certain distance from a crossing to alert engineers to blow the whistle as the train approaches a railroad crossing. This serves as a warning about the oncoming train to the public.
The third bill (House Bill 1493) would prohibit the operation of locomotives in reverse, except in emergency or certain other situations.
"When a train operates in reverse with the long-nose forward or rear-facing, the engineer cannot always see where he is going, which increases the chance for an accident. It also exposes the crew to diesel emissions from the exhaust stacks that normally flow in the other direction," Petrarca said.
The final bill (House Bill 1123) would require photo identification for all railroad employees and that it be sufficient identification for police if an incident occurs.
A sponsor summary of the 4-bill package is available online.
On February 4, the House Transportation Committee holds a hearing on House Bill 1742 (White-R-Philadelphia) related to freight train crew requirements (sponsor summary) at the  SEPTA Boardroom, 1234 Market St., Philadelphia starting at 1:00.
Posted by PA Capitol Digest at 5:20 PM

Gov. Wolf Friday announced the launch of “It’s On Us PA” – the first statewide campaign to address the crisis of sexual assault in schools and on college campuses at Elizabethtown College and was joined by President Carl Strikwerda.
Building on the national “It’s On Us” movement launched by President Obama and Vice President Biden in 2014, “It’s On Us PA” will engage education leaders from school superintendents to college presidents as well as students, teachers, families, and communities to make a personal and public pledge to play a role in preventing, addressing, and responding effectively to sexual violence.
“Pennsylvania is home to some of the best schools in the country, and sexual assault should not be part of any student’s school or college experience. Ensuring our students’  safety and well-being is paramount not only to their success, but the success of Pennsylvania as a whole,” said Gov. Tom Wolf. “I’m proud to be joined by over 40 college and university presidents and school superintendents from across the state – including those standing with me today – to make a commitment to recognize sexual assault as a serious problem in our schools and on our campuses and to take concrete steps to address this epidemic.”
Click Here for the complete announcement.
Posted by PA Capitol Digest at 11:12 AM

A new Franklin & Marshall Poll released Thursday found Gov. Wolf is just as popular as Gov. Corbett was-- 33 percent to 31 percent; Kane is leading the Democratic contest for Attorney General; Joe Sestak is leading the Democratic race for the state’s U.S. Senate seat; and Hillary Clinton and Donald Trump are leading in the presidential race.
The more surprising result is those polled said state government and politicians were the No. 1 problem facing Pennsylvania, twice as high as education at 18 percent.  Overall, 67 percent of those polled think the state is on the wrong track (up 5 percent from October).  52 percent blame the Legislature and 32 percent the Governor (36 percent in October). Only 15 percent think the General Assembly is doing a good job.
In the Democratic race for Attorney General, Kane is leading in a Harper Poll released this week with 31 percent followed by Zappala at 18 percent and Shapiro at 13 percent.
In the U.S. Senate Democratic race, Sestak has 17 percent, McGinty at 13 percent and Fetterman at 6 percent.  The Harper Poll found Sestak at 33 percent, McGinty 28 percent and Fetterman at 11 percent.
The F&M Presidential Poll found Clinton leading Sanders 46 to 29 percent.  The Harper Poll found Clinton at 55 percent and Sanders 28 percent.
On the Republican side of the “Presidential” race in Pennsylvania, the F&M Poll found Trump at 24 percent, Cruz 14 percent, Rubio 11 percent and Pennsylvania’s own Rick Santorum at 1 percent.
A copy of the F&M Poll is available online.
NewsClips:
PA Voters Register Discussed With Harrisburg Antics In Poll
F&M Poll: Voters Disgusted
Poll: Worst Performance Review Ever For Gov. Wolf
Harper AG Race Poll: Kane 31%,  Zappala 18%, Shapiro 13%
Harper U.S. Senate Race Poll: Sestak 33%, McGinty 28%, Fetterman 11%
F&M U.S. Senate Race Poll: Sestak 17%, McGinty 13%, Fetterman 6%
Harper PA Presidential Poll: Clinton 55%, Sanders 28%
F&M Presidential Poll: Clinton 46%, Sanders 29%
F&M Presidential Poll: Trump 24%, Cruz 14%, Rubio 11%
Posted by PA Capitol Digest at 5:57 AM