“Pennsylvania Highlands Community College is working to build career pipelines to in-demand jobs in health care and STEM-related industries by providing students with post-secondary education and stackable credentials to meet local employers’ needs,” said Secretary Oleksiak.  “Gov. Wolf is proposing historic new investments through PAsmart to improve access for Pennsylvania students and workers to education and job training programs to ensure that students and job seekers receive the real-world skills they need to obtain good, middle class jobs.”
PAsmart, a first-of-its-kind $30 million investment, is a new way of thinking about job training and workforce development by providing targeted funding for apprenticeship programs, STEM education, computer science, and more, so students and workers get the training and skills needed for in-demand, middle-class jobs.
Sec. Oleksiak and Deputy Secretary Cipriani toured the Pennsylvania Highlands Community College health care program and met with students and educators.  The college recently approved a new Patient Care Technician certificate program that will be offered to students this fall.
Wolf Administration officials also visited the engineering tech and computer science labs.
“Education and training programs like those offered at Pennsylvania Highland Community College that rely on cooperation between local businesses, educators and local government officials to train and upskill the regional workforce provide positive benefits to employers and job seekers alike,” said Cipriani.
After the tour, the secretary and deputy secretary sat down with Rep. Bryan Barbin (D-Cambria), Cambria County Commissioner Tom Chernisky and representatives from Pennsylvania Highlands Community College, Cambria Regional Chamber of Commerce, Convergis, Goodwill Industries, Forest Hills School District, Johnstown Area Regional Industries, Johnstown Welding and Fabrications Inc., PA CareerLink® Cambria County, North American Hoganas, Southern Alleghenies Workforce Development Board and Riggs Industry to discuss workforce development initiatives.
“We are most effective in meeting the training needs of our region when both businesses and government support our efforts,” Pennsylvania Highlands Community College President Dr. Walter Asonevich.  “We depend on the partnerships we have with hospitals, manufacturers, the county commissioners, and so many others to provide the training needed in the most cost-effective ways.”
Pennsylvania Highlands Community College is located in Johnstown with campuses in Blair, Cambria, Huntingdon, and Somerset Counties. Pennsylvania Highlands provides academic programs designed to prepare students for entry into the workplace or to transfer and continue their education at other higher education institutions.
Pennsylvania Highlands works closely with businesses and industries to provide workforce training and continuing education opportunities to employees in the region.
Last month, the governor signed an executive order to cut red tape and improve coordination between several state agencies to more effectively deliver workforce development services to Pennsylvanians.
Under the executive order, the Pennsylvania Workforce Development Board, the governor’s private sector policy advisor, will provide recommendations on the distribution of the $30 million in PAsmart funding, which will be driven out through competitive grants.
This collaboration will help to ensure the investments meet employers’ need for skilled workers and that workers are gaining the skills for good, middle-class jobs that will grow Pennsylvania’s economy.
For more information about pursuing an education and career in Pennsylvania at any stage of life, visit the PAsmart website.
Posted by PA Capitol Digest at 1:01 PM

“The Pennsylvania Grand Jury report on child sexual abuse within the Catholic Church has rightly gained attention across our Commonwealth, across the nation and throughout the world. The magnitude of suffering endured by victims is atrocious.
“Pope Francis has acknowledged the wrong doing of catholic clergy members and their superiors, who allowed the extensive abuse throughout six of Pennsylvania’s dioceses. However, admitting the failing is not enough - the church must continue to remove any priest who was implicit in this ordeal, as well as provide restitution for victims.
“The church needs to establish a victim compensation fund this year, to make restitutions to its victims. Monies should also be utilized to prevent abuse from happening in the future.
“Funds have been established in other states in times of extraordinary circumstances in order to compensate individuals who have suffered. The victim support fund should be administered by a neutral third party to ensure fairness and objectivity. The victims of child sexual abuse have endured the unimaginable. The emotional scars that they are left with may never heal. While financial support cannot change the past, it has the potential to aid victims as they attempt to move forward.
“The Senate unanimously passed Senate Bill 261 in February of last year, to strengthen laws as they relate to child sexual abuse. The language currently contained in Senate Bill 261 has no known opposition. The House of Representatives should have acted on the bill last year, and I continue to urge them to pass the bill.
“Many survivors continue to advocate for legislation which would include a retroactive component. While I fully appreciate their passion for this issue, it does not change the unconstitutionality of the reviver in light of Pennsylvania’s Remedies Clause in our constitution, which prohibits a retroactive change to civil and criminal statute of limitations. The possibility of allowing a reviver by constitutional amendment has also been raised. I would support a constitutional change, however it is an extended process and has no absolute certainty.
“The brave men and women who have come forward to shed light on this tragedy are no doubt courageous survivors who deserve our support. No action we take in the legislature can remove the pain and horror these victims have endured. Discussions must continue to take place about how to help survivors in constitutionally appropriate ways.”
NewsClips:
AP: Scolforo, Levy: Scarnati Cautions Against Retroactive Child Abuse Claims
Scarnati: Only Constitutional Change Will Lead To Compete Reform Of Statute Of Limitations
Posted by PA Capitol Digest at 10:07 AM

A new Franklin & Marshall Poll released Thursday finds 46 percent of registered voters believe Gov. Wolf is doing an excellent or good job, which is similar to the March and June F&M Polls.  Wolf holds a 52 percent to 35 percent lead over challenger Scott Wagner among likely voters.

41 percent of voters believe Sen. Casey is going an excellent or good job, which is a bit higher than March and similar to June.  Casey holds a 47 percent to 34 percent lead over his Republican challenger Lou Barletta.
Among other findings--
-- More Democrats (60 percent), than Republicans (53 percent) or Independents (33 percent) are “very interested” in the upcoming election;
-- 74 percent who plan to vote for a Republican candidate, particularly for U.S. Senate, are casting their ballot to support President Trump;
-- 38 percent believe President Trump is doing an excellent or good job, which is higher than the March survey and similar to June.  It also similar to President Obama’s rating at this point in his Presidency;
-- 31 percent say they have seen an increase in their income since the federal tax cuts, although most say-- 55 percent-- it is only a small increase; and
-- 35 percent do not believe and 21 percent do not know the Trump Administration has made significant changes to the Affordable Care Act, 54 percent of those who believe administrative changes say those changes will make the healthcare system worse for them.
NewsClips:
F&M Poll: Democrats Outpacing Republicans As Election Nears
Micek: Wolf, Casey Still Hold Double-Digit Leads Over Republican Challengers
Trump’s Unpopularity, Democratic Voter Enthusiasm Drive Wolf, Casey Leads In New Poll
Posted by PA Capitol Digest at 4:40 AM 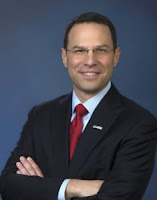 “All across Pennsylvania, parents are taking their kids to college,” Attorney General Shapiro said at a press conference at University of Pittsburgh. “When they drive away from campus, of course they should be sad to leave them, but they shouldn’t be worried about their children’s safety. These institutions are responsible for keeping students safe and we’ve pulled together ideas from experts across our Commonwealth to help them do that.”
Last August, Attorney General Shapiro announced his Campus Safety Initiative, which is culminating in this report.
His office held five roundtable conversations to discuss four key campus safety concerns that require the attention and involvement of the entire community to address – drug addiction, alcohol abuse, mental health awareness and sexual assault prevention.
These community-based roundtables brought together students, victim advocates, survivors, local law enforcement, college and university staff, and experts from different fields to identify strategies and promote responses that are survivor-centered and trauma-informed.
The roundtables took place over the course of the 2017-18 school year, and were hosted by: Dickinson College; Lincoln University; Slippery Rock University; Drexel University; and the University of Pittsburgh.
Pennsylvania is home to 750,000 students at 200 colleges and universities. In 1986, student Jeanne Clery of Lehigh University was raped and murdered, leading to passage of the federal Clery Act, which requires colleges to be more transparent about crime that occurs on their campuses.
“There is great work that has gone before us,” Attorney General Shapiro said. “We want to build upon that work, and by talking directly with students, university leaders, advocates, and law enforcement, we hope that our institutions will undertake these new ideas to improve safety for every student on every campus in Pennsylvania.”
Attorney General Shapiro was joined at today’s press conference by University of Pittsburgh Chancellor Patrick Gallagher, Gov. Wolf’s Executive Director of Asian Pacific American Affairs Tiffany Lawson Chang, University of Pittsburgh senior and student leader Sarah Stone, and a host of other university officials, students, and safety advocates.
“This report outlines clear guideposts for colleges and universities throughout the Commonwealth—and it will help inform our work moving forward,” says University of Pittsburgh’s Title IX Coordinator Katie Pope. “Equally important: It has helped fuel important conversations around sensitive issues—and it’s a discussion that we are grateful to continue with Attorney General Josh Shapiro, his team and our colleagues throughout the state.”
The four key campus safety concerns are interrelated and often build upon each other.  Sexual assault is a critical topic in the report, as college-age students are at higher risk for sexual violence than other age groups.
Eleven percent of all college students experience rape or sexual assault, including 23 percent of female students.
Campus sexual assault is directly impacted by alcohol abuse, with nearly 70 percent of sexual assaults involving an intoxicated perpetrator and 43 percent involving an intoxicated victim.
Additionally, 1,700 college students die each year from alcohol-related injuries.
Drug use is also a growing concern on campus. 862 Pennsylvanians between the ages of 15 and 24 died from drug overdoses in 2016, and overdose deaths in Pennsylvania continue to rise. Addressing drug use on campuses is critical to keeping students safe.
One in five young adults also experiences a mental health condition. In addition to suffering the direct impacts of these conditions, students often self-medicate with drugs or alcohol.
In fact, 1 in 12 college students admit to making a suicide plan at some point in their young lives.
“All of these issues are connected – drug and alcohol abuse, mental health and sexual assault,” Attorney General Shapiro said. “To address one problem, we have to address them all as one community. We must reduce the stigma for victims and survivors: it’s not your fault, and we’re here to support you and get the help you need. We hope colleges and universities will use the best practices identified in this report to have broad, open discussions about campus safety and how to promote key initiatives that work for their individual campuses.”
Click Here for a copy of the report.  For more information, visit the Attorney General’s Campus Safety webpage.
Posted by PA Capitol Digest at 4:52 PM