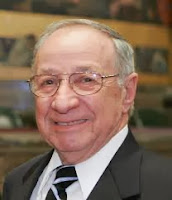 Gov. Corbett visited Frances Slocum State Park in Luzerne County Friday to rename the interpretive building the “Patrick J. Solano Environmental Education Center” in recognition of Solano’s exemplary life of leadership and service to Pennsylvania’s state parks and forests.
“This is a well-deserved honor for Pat for his many, many years of distinguished public service, and as an advocate for state parks and forests and Northeast Pennsylvania,” Gov. Corbett said.  “It’s fitting that his name will forever be on a building dedicated to teaching children and visitors about our natural world and our history.”
In addition to many other roles, Solano served as deputy secretary for Parks and Forests with the former Department of Environmental Resources and as the acting secretary when the Department of Conservation and Natural Resources was first created in 1995.
“The center welcomes more than 15,000 people annually, many of them school children, with messages about the beauty and importance of our natural resources; our history; and the fun of being active outdoors,” Gov. Corbett said.  “His name on a building that can help people come to know and love our natural resources is a fitting tribute to Pat for his tireless leadership and advocacy.”
The center sits near the shore of the park’s lake.  Programs are conducted by an environmental educator from March through November.  Curriculum-based environmental education programs and teacher workshops are available to area schools.
The building features exhibits on American Indians and ecological topics. Improvements are planned in the future.
Twenty-three fourth grade students from the Montgomery Avenue Elementary School participated in the renaming ceremony and in an environmental education program on owls following the event.
In Solano’s career he has held numerous prestigious positions, including senior counselor to Gov. Tom Ridge and Gov. Mark Schweiker, as well as senior advisor to the Senate Majority Leader, Dominic Pileggi (R-Delaware). Pat has also served as friend and advisor to numerous public officials and community leaders.
In 1996 Solano received the Thomas P. Shelburne Award from the Northeast Environmental Partners organization honoring him for his work in environmental protection and conservation.
During World War II, Solano completed 23 combat missions with the Eighth U.S. Air Force Heavy Bombardment Group. For his service, he was awarded the Group Presidential Citation, the Air Force Medal with two Oak Leaf Clusters, and the European Combat Theatre Medal with two Bronze Stars.
Frances Slocum State Park consists of 1,035 acres in Luzerne County. The park is named for Frances Slocum, a young girl who was kidnapped by American Indians in 1778.  Frances Slocum Lake is the focal point of the park and forms a horseshoe covering 165 acres.
NewsClips:
Environmental Ed Center To Be Named For Patrick Solano
Pat Solano To Be Honored For Lifetime Of Service
Posted by PA Capitol Digest at 8:01 PM